Well, it is early afternoon and I finally found some energy to take part in this week's yarn along with Ginny.
I had a bad night, who gave permission for all night construction work in the middle of a residential area anyway? And not enough with that noise we had a big thunderstorm around midnight, throw in a few hot flashes and you can imagine how awake and fit I am today. I decided to take the day off, staying in my jammies, watching TV-shows on the CBS website and knitting cotton yarn leftovers (why do I have so many of them?) into garter stitch strips to be made into another under-the-cat-box-rug. When I run out of things to watch on the computer I will move on to an old TV show on DVD. I am reading 'The Help' and the book makes me feel so uncomfortable, I will never ever understand how one group of people can think themselves superior to another, that is just not in my nature. So I hate what is going on in the book but I will finish it. 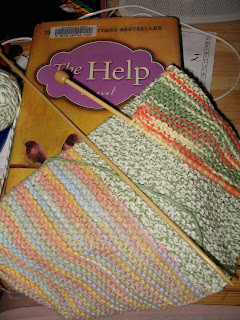 I found my 17 year old cat in the porch panting like an old bloodhound and brought her into the house to cool off, now she is hiding under the bed. She has some health problems and I am very worried about her (big part of my not doing well these past few weeks). Please send some positive vibes our way. Thank you.
Posted by Maria at 1:41 PM 2 comments:
Labels: books, knitting, life in general, yarnalong 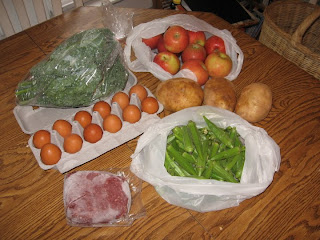 - we saw a lot of fog and even more rain
- we went to the farmer's market
- we cooked and ate okra for the first time ever, and we liked it
- we visited a new (for us) church, the fifth one in the six years we have been living here, this one is quite different but maybe promising
- we went to the library to pick up a book and came back with a stack of DVDs
- we watched "The Pillars of the Earth" and liked it a lot, now I want to re-read the book, it has been a very long time since I read it and I can't remember much
- we went to a talk about railway history in NC and specifically in High Point
- I had a rather sleepless night due to too much stress during the day and too many crickets in the garden
- I started reading "The Help" and so far I am not liking it
- I started a new knitting project, something simple to keep my hands occupied while watching DVDs

I am still struggling with a lot of things but at least there are moments of light in the darkness now. Maybe things will start to ease up soon.

I hope your weekend was a good one and that this week will bring some good things for us all.
Posted by Maria at 7:35 AM 2 comments:
Labels: farmer's market, life in general, weekend 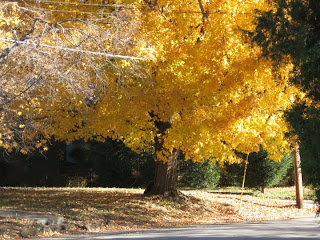 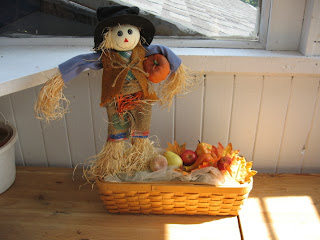 Posted by Maria at 6:47 AM 3 comments:
Labels: fall, seasons

I am currently dealing with a difficult situation that robs me of nearly all my energy, especially my creative energy. It is also the reason why there is not much blogging going on at the moment. It is complicated and has a lot to do with my upbringing and my background and my fight against it all.
During my wanderings across blog world this morning I started thinking that my problem is really not that bad, compared with what other people are dealing with. But then I realized that in the context of my life, my personality and my here and now it is just as bad no matter how other people might see it.
I am nearly 50 years old and I am still feeling like the unwanted, unloved child I used to be. Unimportant and largely ignored. I think it is time to get out of that trap I just don't know how.
Well, I did not really mean to write all that but maybe it helps with finding a solution before I go completely nuts.
Posted by Maria at 11:51 AM 8 comments:
Labels: life in general 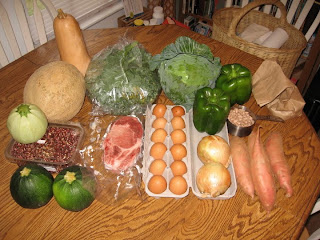 - a visit to Whole Foods Market to buy some things that are hard to find around here
- a broken lawn mower - taken in for repair
- a broken fan - beyond repair (it kept us cool all Summer and saved us a lot of money)
- a leaky sink - already repaired
- watching Get Smart on DVD from the library (the original series)
- a lot of reading
- a bit of garden work
- green eggs, no ham, with spinach from the garden

I hope your weekend was a good one.
Posted by Maria at 6:44 AM 4 comments:
Labels: farmer's market, life in general, weekend 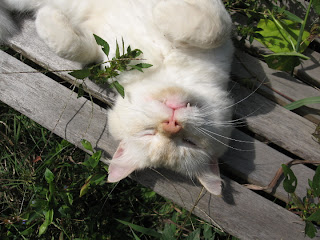 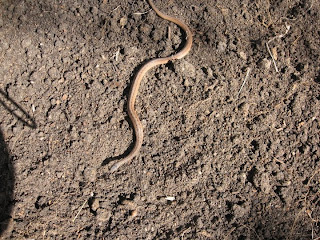 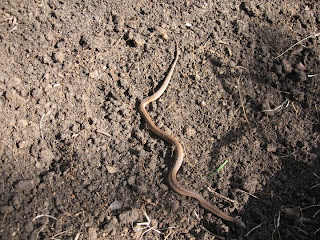 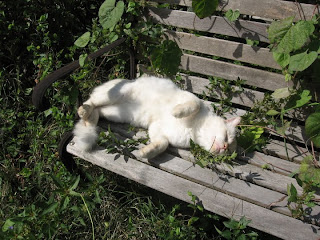 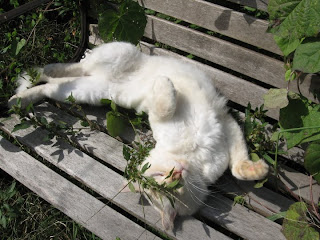 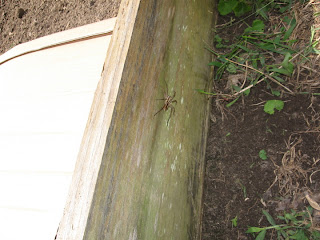 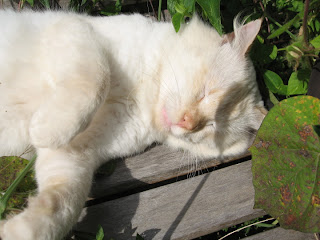 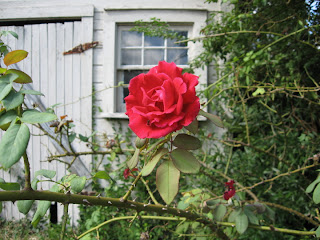 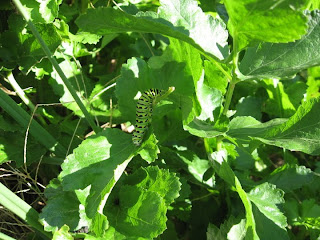 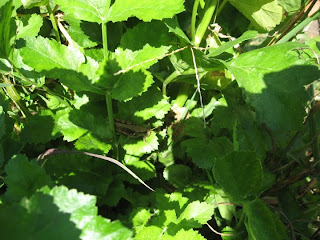 Our weekend started Saturday morning with our usual trip to the farmer's market. We went a little later, I felt the need to take things easy. We bought eggs, potatoes, peppers, onion, apples, black berries and a spaghetti squash. I am going to buy at least one type of squash every weekend from now on. Sadly, there were no plums for sale at all. 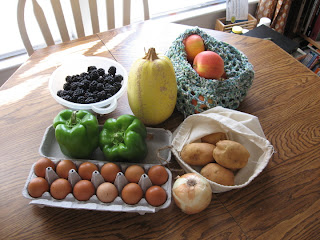 When we came home we did some housework (vacuuming and tidying mainly) and after a quick lunch we set out to explore the Guilford Courthouse Military Park. What was once a battlefield (in 1781) is now a lovely park with a nice hiking trail. We walked the trail, which is 2.5 miles long and then visited nearby Tannenbaum Park which also was part of the battlefield. While at the visitor center we found a few brochures about other interesting places and discovered a whole net of hiking trails around three lakes in Greensboro. Lots more to do in the future!

Sunday morning we headed to the NC Zoo. Now that was disappointing. I have never seen such a huge zoo witch so few animals inside. You have to walk 5 miles to get around the entire zoo, which we did, but to be honest, there are nicer places where I can walk without having to pay to get in. Not something we are likely to do again.

Time to dust off those old walking shoes and head out! 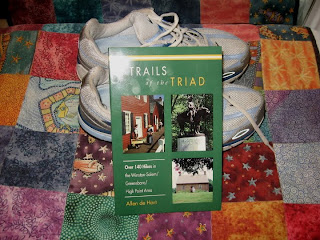 Last week my back ache kept me from doing much but this week I made some progress on my UFOs.

I finished the three fluffy winter blankets for my cats and made three rugs out of garter stitch squares that I knitted from leftover yarn a while ago. I had originally thought about using them under the cat box to catch the litter the girls drag out but I think they are too nice for that and I will instead let the furry ladies use them to sleep on. 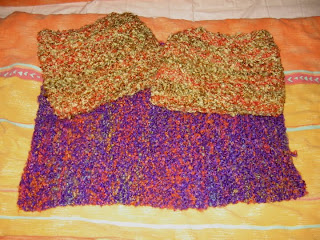 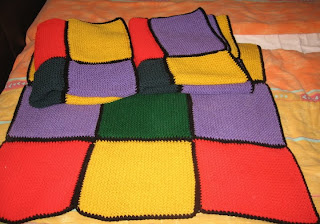 I also made an apron and matching hot pad as part of a friend's Christmas gift and finally finished the knitted bag for which I had to find handles. They are not the ones I would have liked but they work. The bag is also a gift for a friend. 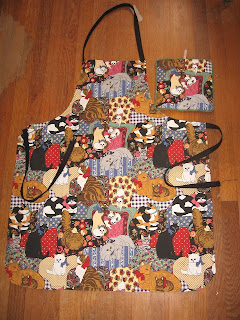 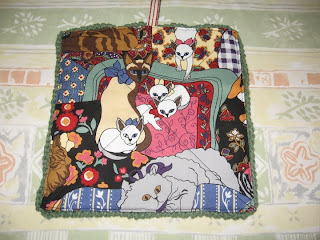 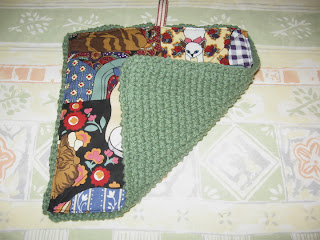 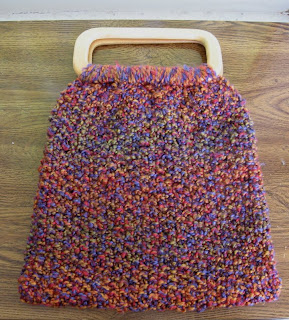 Happy Wednesday everyone, now that my back ache is gone I can slowly resume my usual doings. And I am happy to be able to join in Ginny's yarn along again.

I am knitting a hat for Del. The pattern is "Fortnight" by Jared Flood. I love his patterns, they are well written and easy to follow. But - if one does not read the entire pattern before casting on, one might just end up frogging after row 11 (because one forgot to knit 4 rows at the beginning) ;-). I am using Patons Classic Wool, I like the way it feels and it is easy to work with.
I am reading "The Fruit of Her Hands" by Michelle Cameron, one of three books I found at the dollar store last weekend. It is a very interesting story, taking place in 13th century Europe. 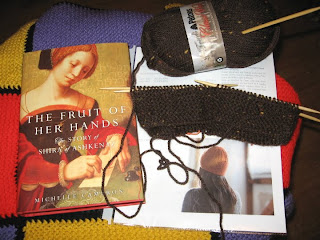 Posted by Maria at 7:41 AM 3 comments:
Labels: books, knitting, yarnalong

I had a rough week last week. Tuesday morning I pinched or pulled something in my neck and during the week the pain wandered slowly down my back. I normally don't take painkillers because "I can live with pain but not without my liver", but it got so bad that I actually took one twice, nothing heavy, just some ibuprofen. By the end of the week it was much better and we were able to do some things on the weekend.

Friday night we did our usual weekly shopping. Our Dollar Tree store occasionally has books for sale. This time these three looked interesting and I bought them. I already read "Days of Atonement" over the weekend and loved it. I have his first book on hold at the library. 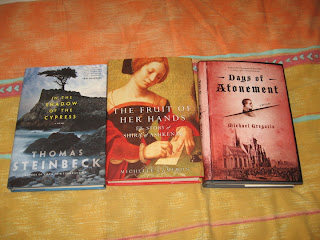 Saturday we went to the farmer's market as usual, we made a slight shift from Summer to Fall by buying plums and a butternut squash and fewer peaches. The peaches are coming to an end, they are no longer as good as they were a few weeks ago. We also got some chicken, peppers, onions and eggs. 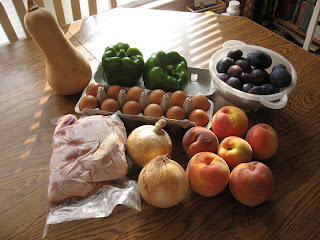 The excitement of the weekend was provided by a bee swarm in one of our trees. We called a beekeeper to take a look at it and he told us that the swarm was too small and so late in the year it would not survive if he would capture it. They pose no danger to anyone, so we just left them alone, they will eventually move on. 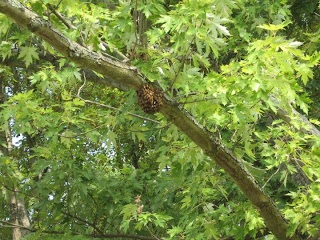 On Sunday and Monday we spent the morning working in the garden, we worked on the non-edible part of the property which, admittedly, gets a little neglected during Summer. We weeded, mowed, pulled, sawed and hacked our way through the jungle and it looks much better now. We decided to abandon our plan of making the veggie garden bigger. We do not want to invest every extra dollar into the garden, we are not getting any younger, and we can buy really good produce from local farmers. Instead we are going to put some money by for "fun stuff" like day trips and such.

Sunday afternoon we took a little road trip through the area south of us and it was quite depressing. So many houses and businesses are for sale or rent. I can not help wonder what happened to the people. Are the homeless now, did they move away because they found work elsewhere? One thing we discovered is that the next bigger town down south - Asheboro - looks a lot livelier than our own and we will check it out in the coming weeks, maybe we can go there for some things we can't get here anymore instead of driving to Winston-Salem all the time. I spotted at least three big thrift stores that need to be explored, a quilt store and who knows, there might even be a yarn store hiding somewhere. :-)

It is raining today and it is supposed to stay this way for the rest of the week. I have some housework to catch up on and hope to be able to work on some of my UFOs. And I still have two new books to read.

Have a great rest of the week everyone!
Posted by Maria at 11:37 AM 3 comments:
Labels: books, farmer's market, garden, weekend
Newer Posts Older Posts Home
Subscribe to: Posts (Atom)