On Monday we went down to Charlotte to meet Del's cousin Kathi and her husband Bob. They were in town for a convention and added one more day to meet us. The drive was quite nice but once we got into the city we realized that we are not used to city traffic anymore. It is amazing, when we were here on vacation in 2004 we stayed in Concord and explored mainly the area around Charlotte, visiting all the race shops, and we liked it a lot. Coming from Vienna it felt nice, not so many people, etc. Now, after we have lived up here in High Point for a little over 9 months the area down there is too crowded and hectic for us. :-)
They day was very nice. We picked Kathi and Bob up at their hotel and decided to go to lunch to Cracker Barrel, which we all like a lot. But before lunch we decided to show them Lowe's Motorspeedway. The Richard Petty Driving Experience had a few cars out running and it was nice and noisy. After lunch we asked them if they would like to visit a race shop - after all, you can't visit NC without having seen something racing related. ;-) So we took them to Hendrick Motorsports, not because we are such big fans, but mainly because the facility is very impressive and very accessible, a lot to see for visitors. Then we drove around a bit so they could see the countryside, drove through Kannapolis and Mooresville and made a pitstop at DEI. On the way back to Charlotte it started raining cats and dogs and the drive was a bit scary. But it got worse. After we dropped them off at the hotel and chatted a bit, we started to make our way back home. It was raining, but not so bad. Yeah, right. It got a lot worse, I have never seen such heavy rain before, the last few miles into High Point and then in the city itself we had to drive almost blindly, it rained so heavily and it started to get dark also. I was really scared. But we made it home safely. Thank God.
Yesterday we spent at home, it was still raining and Miss Kitty and I sat at the open balcony door watching the rain. :-)
I have not felt much like being creative the past week, other than working on the afghans. I did not lose any weight in the last week, but I dropped another inch around my butt, which is fine with me. It is a bit more difficult to stick to the diet when we are eating out a lot, but that is okay, every day is a new beginning. If we step off the wagon, we just press reset and do better the next day. I did not skip any exercise though, so I am being only half bad. I have learned a few things on this new weight loss journey:
1. Food is not the enemy, but some foods are.
2. Losing weight and feeling better is all about making the right choice.
I feel that I am on the right way and I will stay on it.
The last race weekend did not go all that well for some of my drivers, I hope this one will be better.
Posted by Maria at 10:35 AM 1 comment:
Labels: life in general 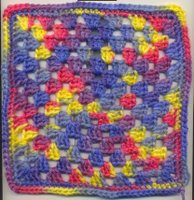 I managed to get enough of both the thicker and the thinner yarn to make one afghan out of each. :) While I was at the store I found another yarn that had been deleted and was marked down quite a bit, of course I had to buy it. It is a bit darker in color but still nice enough for children.
Posted by Maria at 10:32 AM No comments:
Labels: crochet, yarn

Last night I discovered that the pretty candy colored yarn I am using comes in different thickness, which must have been an error when they spun it. Apparently I had two skeins that were thinner, shinier and also the colors were stronger. The difference in color would not be such a problem, but the squares are a lot smaller than the other ones which would make the whole afghan a bit distorted. I hope I'll be able to get enough yarn of both kinds to make two blankets. I wanted to go get it today but it is so hot, I don't really want to go out. Maybe later today.
On a more positive note, my weightloss program is still going well. I am trying to put to work what I learned and I am not tracking what I eat this week. If I still manage to lose weight, I am doing it right. :) I have increased my exercise time and I am doing good with that too.
And Del's blood pressure medicine is finally doing what it is supposed to do. I am sure that the fact that he lost a lot more weight than me (almost 25 pounds!) has a lot to do with it as well.
Last Sunday we went for a walk along the Bicentennial Greenway, this time in Gibson Park. Although the path is paved it is not flat and straight, there are lots of ups and downs in it and it winds along two areas that are wet, swamplike, and we could hear the bullfrogs tuning up for their evening concert. I had never heard them before and it sure is a strange noise. Kinda like a rubber band being strung over a box and then plucked like a guitar string. There was also a colony of birds in a stand of trees but I could not see what kind they were, I just heard them, they made a sound like some machinery and I was wondering what is going on in the woods.
We have not been to church for a long time, the high gas prices are not encouraging long trips at the moment.
Still no news on the job and Green Card front. Del has had more interviews and still has more to come. And the last time I called about my card I was told it is being processed. That makes it two months now that it is has been processed. Oh well, it is too hot to learn how to drive anyway and who needs a job? I am supposed to support myself and at the same time the powers that be don't let me work, how does that go together? The whole thing is rather painful in the light of all the negative talk about illegal immigrants recently, all the benefits they can get, good for them, I am a legal immigrant and I can't get anything, not even a driver's license. I always thought Austria had invented bureaucracy, but the people in the immigration offices have made it an artform for sure.
We are exercising patience, it builds character, question is, will anybody like the kind of character this is going to build?
Posted by Maria at 10:13 AM No comments:
Labels: life in general, yarn 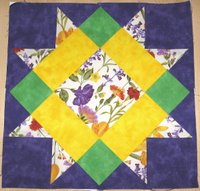 Here is the block for June.
Posted by Maria at 2:08 PM No comments:
Labels: quilting 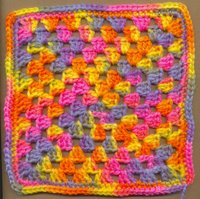 I went to buy some beads for a friend of mine and came across a cute yarn in candy colors that just begged to be used in an afghan for the Camp. :) Every time I work with it, I get a craving for orange flavored ice cream.
Posted by Maria at 2:02 PM No comments:
Labels: crochet 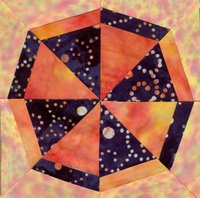 I am almost caught up. This is the block for the Woman of Endor. The story deals with the occult and the woman is actually called a witch in my bible version, but she is also a warm and caring person, so I chose a dark and a warm color to represent both sides.
Posted by Maria at 8:49 PM No comments:
Labels: quilting 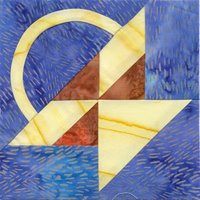 I just finished the block for Abigail. And I must say I am very pleased with it. :) Abigail was a very positive character, a smart woman married to an idiot husband and she made the best of the situation and saved her husband and her people.
Posted by Maria at 10:53 AM No comments:
Labels: quilting 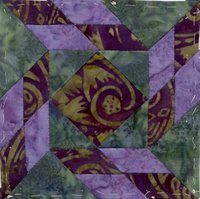 I am still playing catch up. This is block no. 19 - Michal. I chose dark colors because Michal is not really a very positive character. Sure, things were different for women several thousand years ago, but she could have tried to make the best out of her situation (like we all do) and not be so bitter about it.
Posted by Maria at 8:58 AM No comments:
Labels: quilting 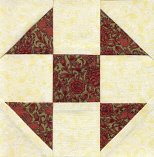 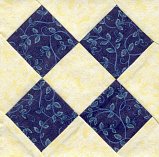 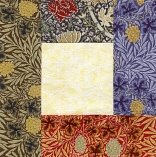 Today I started working on "Sylvia's Bridal Sampler", a quilt from one of the books by Jennifer Chiaverini. It is another sampler quilt made with 6" blocks. It is my third one, I really like them.
Here are the first three blocks. They are all paper pieced. I am using my William Morris fabrics for this project.
Posted by Maria at 5:53 PM No comments:
Labels: quilting 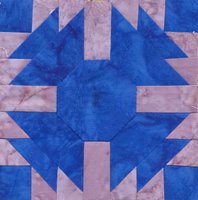 I have fallen a bit behind with both the study and the blocks. Today I decided to play catch up and instead of doing one woman per week I try and do the study for the women I missed one woman per day. The blocks are a bit complicated, so I made only one today, the second one will be hand sewn and is ready to get started. This the block for Hannah.
Posted by Maria at 5:11 PM No comments:
Labels: quilting
Newer Posts Older Posts Home
Subscribe to: Posts (Atom)