Posted by Maria at 9:29 AM 3 comments:
Labels: knitting 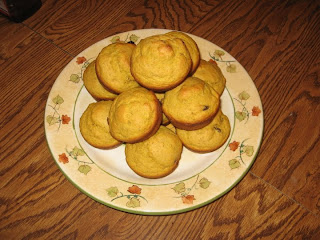 - a trip to the farmer's market which seemed strangely empty
- pumpkin muffins for breakfast because there is a hint of Fall in the air
- homemade watermelon ice cream for dessert because it is still Summer
- a knitting project finished
- yummy fall colored yarn on sale which lead to
- a new knitting project started
- watching old TV shows on Hulu
- and of course cats, cats and more cats (happily enjoying their new blankets) 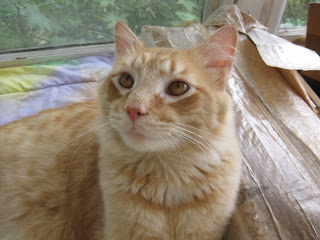 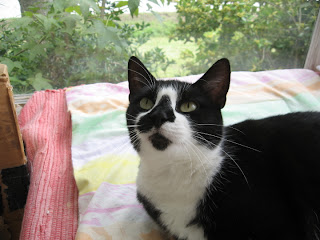 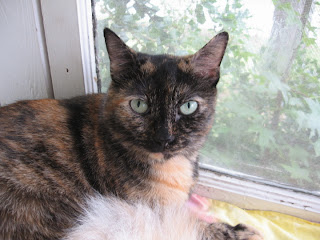 Posted by Maria at 8:17 AM 1 comment:
Labels: baking, our cats, weekend

I stitched up a few more blankets and put them in the porch for the kitties to enjoy. 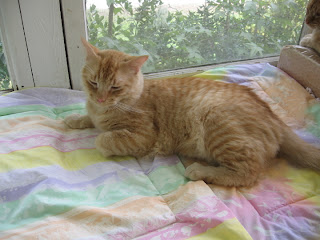 And as usual I had helpers (and you wonder why I get so little done these days?) 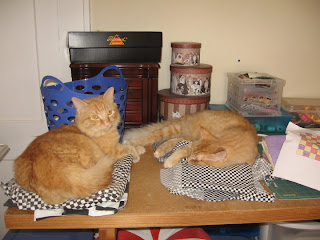 Posted by Maria at 8:00 AM 2 comments:
Labels: our kittens, sewing

Our "kittens" are 11 months old today. (It took my all day to hunt them down for some halfway decent pictures.)

Posted by Maria at 3:52 PM 1 comment:
Labels: our kittens

Well, I made it. I turn 50 today, can't say that I feel any different than yesterday, but hey, it is half a century, makes a girl think. :-) 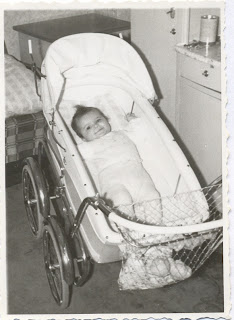 Posted by Maria at 6:00 AM 6 comments:
Labels: celebrations, life in general

I had a relaxed weekend and got some sewing done. It was too wet to do much gardening.
I made the first of at least 8 cat blankets. Flannel on one side cotton fabric on the other and upcycled old comforters on the inside. 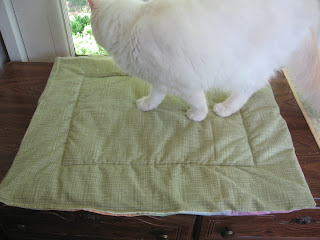 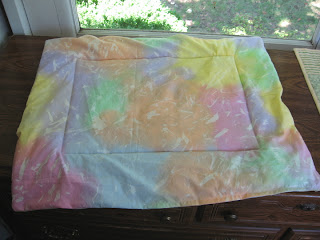 And then there was this. An owl clothespin bag. There are a few unnecessary steps in the pattern as I found out afterwards. ;-) I will probably make another one leaving out all these steps. I think I made the mouth too wide and put it a little too far down, it does not hold a lot of pins. I like the idea though, would make a great gift as well. 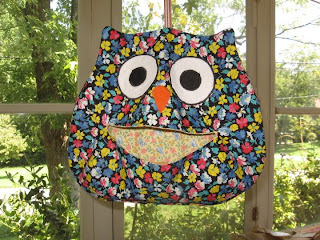 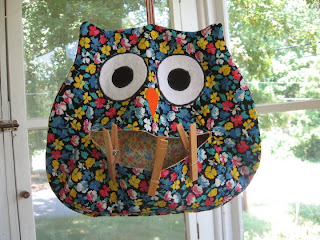 Posted by Maria at 6:39 AM 1 comment:
Labels: sewing, weekend

At the end of June I put up a jar of lacto-fermented cucumbers. The recipe sounded like the result would be pretty close to my favorite type of pickles back in Vienna.
This is what they looked like on the first day. 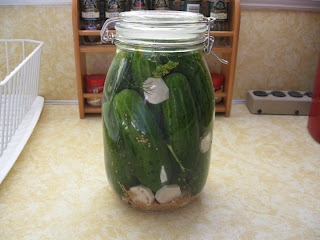 And this is when they were ready to be put into cold storage. Since my basement is not fit for food storage I put them in the fridge. They are supposed to stay there for at least six weeks. 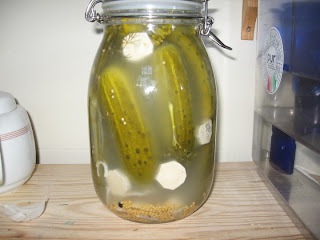 Today was close enough to the six weeks and I could no longer stand the suspense, so I had a taste and YES, they taste like I thought they would. Next weekend I will make another batch and then move on to sauerkraut.

Posted by Maria at 4:21 PM No comments:
Labels: fermenting

With the SewingRoomSewAlong, that is. :-) I just finished the needle book and the scissors case. Now I get to take a break till next month. Time to start working on some Christmas gifts.
Have a great weekend everyone! 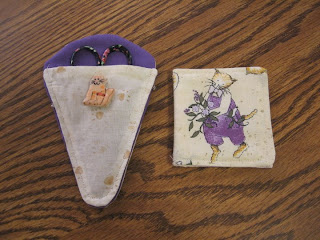 Posted by Maria at 10:22 AM No comments:
Labels: sewing, sewingroomsewalong

Have a great weekend everyone! 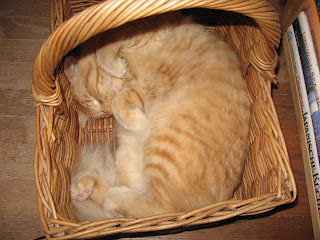 Posted by Maria at 4:06 PM 1 comment:
Labels: our kittens

Well, I must admit that I did not care much for "Lark Rise to Candleford", all the class distinction and the lording it over the poor people and them being expected to enjoy their station in life got to me eventually and I gave it up before the end of the third part. Just not my cup of tea.

I did not like the end of "Captain Corelli's Mandolin". It is hard to imagine a guy haunting a woman for 50 years without ever making his presence known to her just because he saw her holding a baby. Come on, not even back then would a man have reacted that way. What a wuss! She was probably better off without him anyway. Other than that I liked most of the book.

I really enjoyed "What Did You Do In the War Mommy?", I have always been a big fan of oral history. The books about the Donner Party were written by survivors who were both children at the time of the tragedy and wrote the books later from memory and with the help of what other people could remember about it. And "Blood Sisters" is an interesting book about women in the French Revolution.

None of the books were re-read. They have been sitting on my shelves unread, a remnant of my days as a book hoarder (inherited from my father) and there are still more. I had read "The Name of the Rose" before in German, but had not remembered how boring and difficult some parts of it are to read, but maybe I just was not in the right mood or it was too hot. ;-)

I usually go to the library or buy used books these days and whenever I read one of my books and feel that it does not need to be sitting on my shelves afterwards I donate it to the library. What they don't use will go into the library's used book sale.

I am currently reading through some books that are actually meant for young readers and I really like them. I was thinking about donating them but maybe I will keep them after all. :-)
Posted by Maria at 11:29 AM 2 comments:
Labels: books

It was too hot to do much of anything while I was away so I spent a lot of time sitting in front of the fan, reading. Here is the pile I worked my way through. They are all my books, some have been sitting on the shelves for quite a while. Not only do I have a fabric stash, I also have a book stash. ;-) 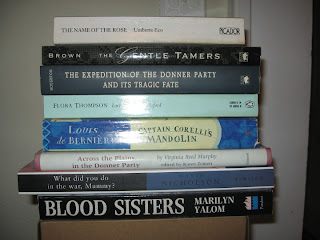