Mr. Moose - long legged, sleek and trim, the most fearless kitten I have ever met. Nothing scares him, when he hears a strange noise he runs toward it to check it out. He does not show much respect of the older (and much bigger) cats, he tackles them every chance he gets. He loves to wrestle with the boys and the girls don't like him much, I hope they will come around eventually. From the first night on he slept in our bed, sometimes tucked under my chin, snuggled under the blanket, sometimes curled up behind Del's knees or stretched out between us. He has a tremendous amount of energy in the morning, then he eats, crashes in his favorite spot and is not seen until later in the afternoon. He is smart and funny and I am glad he came home with us. 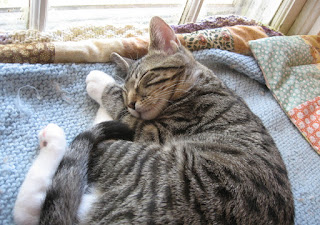 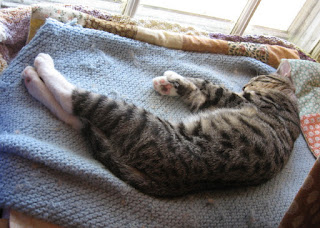 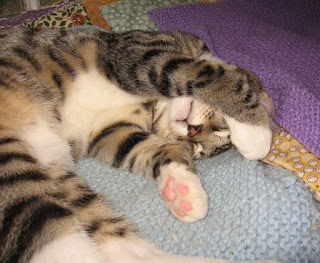 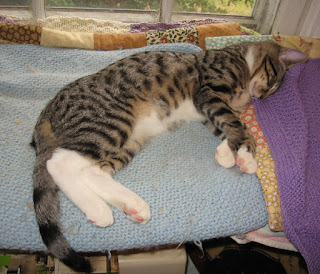 Posted by Maria at 6:30 AM
Labels: feline friday, our cats

he does have really long legs!! he sounds like a treat to watch :)

He is a beautiful cat! Will be interesting to see how much he grows. Looks like he has long legs. So glad he has a loving home!

Such beautiful markings! He reminds me so much of my Pussum. He's been over the Rainbow Bridge for a long time now, but every now & then I see a beautiful cat that reminds me of him.

“Have nothing in your house that you do not know to be useful, or believe to be beautiful”.

Watchers Of Time
by Charles Todd

Mission to Paris
by Alan Furst